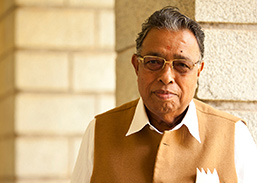 Dr. M.R. Jayaram is the Chairman of Gokula Education Foundation (GEF). He is the eldest son of Dr. M.S. Ramaiah one of the legendary philanthropists & educationalists of Karnataka. Born in 1947 Dr. Jayaram had his education in Bangalore city and graduated in commerce. Since his young age he showed lot of interest in managing the educational institutions supporting his father in all the development activities.

In 1972, at the tender age of 25, Dr. Jayaram has taken the responsibility of Chairman of the Governing Council (now the GB) of M.S. Ramaiah Institute of Technology (MSRIT). His acumen and managerial capabilities brought laurels to the institute which has become widely known to be a premier institute in engineering education. After seven years, in 1979, when M.S. Ramaiah Medical College (MSRMC) was established, he assumed the office of the Chairman of Governing council for this college also. He led these institutions to become very strong in post graduate education and research, apart from acquiring a great name in under graduate education. Dr. M.R. Jayaram has been responsible for placing these institutions as the premier institutions in this country, finding a place in the top 25 institution in the country in their respective fields. As on today GEF has established 18 colleges/schools on its 85-acre Gnanagangothri Campus. The Schools include engineering, medicine, nursing, dental, law, management, etc., with more than 11,000 students on the campus comprising of students from all over India and abroad. It has been his determination and sustained effort that has made each of these institutions as a ‘Centre of Excellence’. After the demise of his father, he created a superspeciality hospital in memory of his father, and this hospital has become a pride of Bangalore today. The MSR School of Advanced Studies is also his creation.

Dr. M.R. Jayaram is not only an educationist, but also a businessman and industrialist of repute. Recently he consolidated all his businesses and brought them under one name called “Valdel Corporation”. Valdel is into Engineering construction, engineering design, Retail, BPO and host of other businesses. He is also into community development and philanthropy. He is the Dharmadhikari (head) of Kaiwara Kshetra, a centre for religious activities located around 60 km away from Bangalore. This Kshetra is into rejuvenation of old temples in and around Kaiwara, providing health and education to the villagers around Kaiwara, daily feeding the poor and needy, conducts annual mass marriages and many such socially relevant activities.