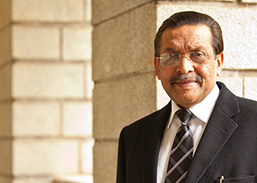 Sri M.R. Seetharam is the Vice Chairman of Gokula Education Foundation (GEF). He is an illustrious son of Dr. M.S. Ramaiah, a legendary philanthropist and educationist of Karnataka. Born in 1956 Sri Seetharam had his education in Bangalore city and graduated in Science. From an early age he exhibited immense leadership potential and vibrant entrepreneurial spirit. He imbibed the qualities of public service, compassion, empathy with the disadvantaged etc from his father.

His devotion to public service made him keenly interested in politics. He was elected twice to Legislative Assembly of Karnataka, in the years 1999 and 2004, from the Malleswaram constituency. He provided best possible civic amenities, developed parks, worship centres etc. He implemented Government Self Employment schemes like Antyodaya, Akshara Dasoha, Yeshswini Co-operative Health Scheme.

As Vice-Chairman of GEF, he is keenly involved in all the activities of the Foundation and is providing valuable support to Dr. M.R. Jayaram, Hon’ble Chairman of GEF in his efforts to steer all the institutes under GEF on a path of continual improvement. Under his dynamic leadership, MSRIT is consolidating its position as a leading technology institute of international reputation.